I was invited to attend the Honda Indy Toronto 2013 on Sunday, July 14, 2013 by WIND Mobile, one of the race sponsors, and to test the new Samsung Galaxy S4 phone, which is now available to WIND customers. Despite temperatures of 38°C factoring in the humidity, I was excited to attend my first Honda Indy and had great seats in the grandstand to view the start and finish positions of the race.

This year, there were two full IZOD IndyCar races at the Honda Indy Toronto at Exhibition Place due to some scheduling problems in another city. By all accounts, the 85-lap IZOD IndyCar race on Sunday was shaping up to be a lot tamer than the race on Saturday.

Scott Dixon, who won the race on Saturday, maintained a steady lead from the beginning while Hélio Castroneves followed him in second place. As you’ll note from the attached images, the Samsung Galaxy S4 takes excellent shots at high speed as a result of the Sports Mode option. The images were much clearer than the photos I took with my iPhone.

Things got exciting with 14 laps to go. James Jakes and Tony Kanaan both hit the wall resulting in a full course caution. Once the track was cleared, cars returned to green flag conditions. At two laps to go, Ryan Hunter Reay forced the issue, colliding with Australia’s Will Power and Takuma Sato from Japan. We now had our second full course caution. Dixon, not surprisingly, won the race for the second time, and pocketed $100,000 for the two wins. Castroneves, who placed second, asked at the post-race interview, “What did [Dixon] eat for breakfast? I couldn’t get near him.” Sébastien Bourdais from France placed third.

What an exciting race and even moreso because I was able to capture some of the highlights with the Samsung Galaxy S4. 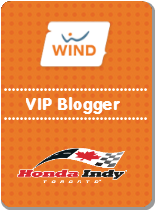 5 Tips for Planning a Memorable Company Event in Toronto

How to Plan a Wedding in Toronto during COVID-19 Restrictions

Want to Get in Better Shape? Read These Tips for Hiring...

Lori Bosworth - June 24, 2022 11
During the pandemic, many of us watched our fitness goals fall by the wayside. This was due to several reasons: 1) gyms and fitness...

Food Festivals in Toronto in Summer 2022

Things to Do Canada Day Weekend in Toronto 2022