With 80% of WayHome Music Festival attendees camping at the expansive Burl’s Creek Event Grounds, it was easy to become immersed in the festival culture. After checking in at the main tollbooth off Highway 11, volunteers helped direct festivalgoers to campsites throughout the grounds. Overnight, the sprawling green space of Burl’s Creek Event Grounds was transformed into a tent city, with thousands of campsites spouting up in neatly organized grids. 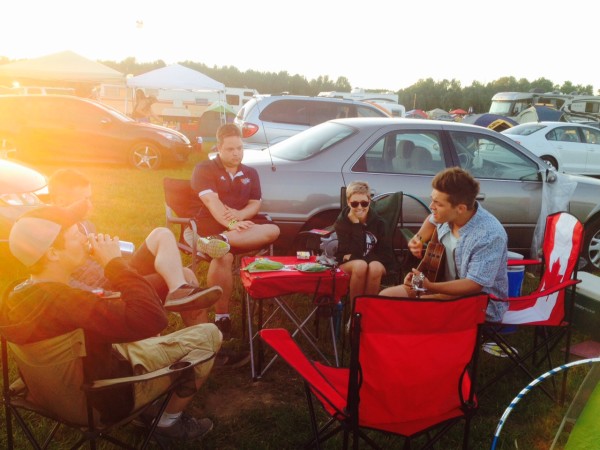 Campsite all set up at Wayhome Music and Arts FestivalThe main festival grounds opened at noon on Friday, July 24. It was clear from the set up that the organizers set out to create a unique sense of community. The four main stages were spread out throughout the event space, allowing enough room for crowds to dance to their favourite band, with minimal noise overlap between the stages. In between the stages were many food and drink vendors, so groups didn’t have to travel far to have their thirst quenched.

Throughout the festival grounds were art installations curated by Toronto-based painter Charles Bierk, which added interesting focal points to the festival and also provided an opportunity to highlight Canadian artists. One of the most impressive art installations could be seen only at night—125 Steps by Nathan Whitford was a dazzling illumination set against the trees of Burl’s Creek Event Ground that bridged the gap between nature and technology and had festivalgoers stopping to stare once the sun had set.

On Friday night, the epic scale of WayHome Music Festival became apparent, as a sea of people settled onto blankets and into chairs in front of the main stage­­—also called WayHome—to listen to a three hour set by Canadian legend Neil Young, backed by the impressive Promise of the Real.

Young played many of his new songs off his recently released album, The Monsanto Years, but, much to the excitement of the crowd, also played many classics including “Heart of Gold,” “Down By The River” and “Keep on Rockin’ In the Free World.”

Friday and Saturday night also featured late-night performances on the WayBold Stage by Girl Talk and Bassnecter respectively. Girl Talk was the perfect contrast to Neil Young’s earnest melodies—they pumped out mashup hits and kept the crowd dancing. Bassnecter, who followed Kendrick Lamar’s headlining show on Saturday night, was a crowd favourite with an impressive light show and electronic beats that had everyone cheering for more when his set ended at 2 a.m.

Although there was a brief patch of rain on Saturday afternoon, Wayhome Music Festival attendees could not have asked for more perfect weather for a weekend of camping and live music. However, security measures prevented individuals from bringing water into the festival grounds, and with only one water refill station, the line up for water was extremely long on Sunday afternoon when temperatures exceeded 30C.

But the heat didn’t stop festivalgoers from enjoying the afternoon. Sunday featured performances by Toronto-based rock band July Talk, who had the crowd sweating, American singer-songwriter St. Vincent and up-and-coming vocalists Vance Joy, who played at sunset at the WayBright stage. Four-time Grammy award winner, Sam Smith, who opened with his iconic song “Stay With Me” and had many in the crowd in tears, headlined Sunday evening.

Wayhome Music Festival has already announced the dates for next year’s festival, which will be taking place July 22-24, 2016 (location TBD).

Where To Go Raspberry Picking near Toronto 2022

Where To See Outdoor Movies in Toronto in Summer 2022