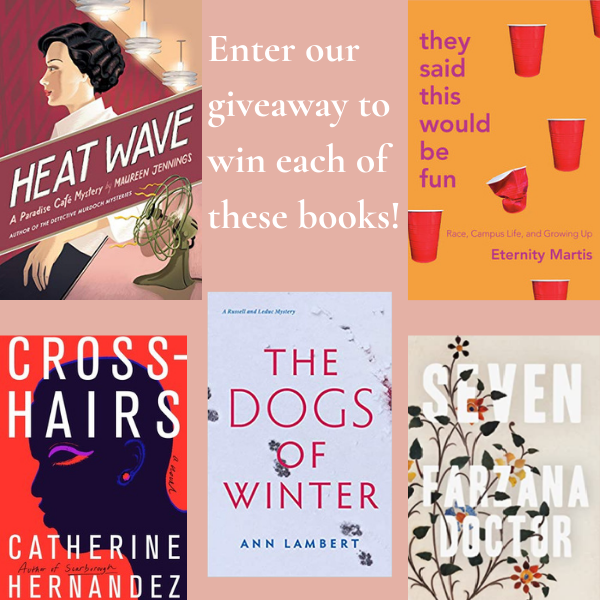 Many of us look forward to fall because it means it’s time for Toronto’s annual book festival, The Word On The Street. For the first time in their 31-year history, the festival will be virtual! The beloved free book festival will take place online from September 26-27, 2020. You’ll get a chance to learn about new books, as well as watch live streams of author events. We’re hosting a giveaway of six books featured at The Word On The Street 2020. Enter our book giveaway below.

Over the festival weekend, you’ll be able to choose between three simultaneous live streams or “stages” on The Word On The Street 2020 YouTube channel, including several kid-friendly events. Instead of walking from booth to booth, you’ll be able to buy books by your favourite authors, publishers, and local bookstores at the virtual marketplace. Discuss your favourite books with other readers in the interactive online space.

The full schedule including the line-up of authors will be released soon.

Registration for The Word On The Street 2020 is free, (with donations accepted). You can choose to donate with your ticket, or support the festival with a donation of any amount at Canada Helps).

I have personally selected books featured at The Word On The Street 2020 that I am excited to read and am giving away one bundle of each of these books to a lucky reader. The book prize is valued at $135 and includes:

When Sharifa accompanies her husband on a marriage-saving trip to India, she thinks that she’s going to research her great-great-grandfather, a wealthy business leader and philanthropist. What captures her imagination is not his rags-to-riches story, but the mystery of his four wives, missing from the family lore. She ends up excavating much more than she had imagined.

Are you a fan of Murdoch Mysteries? Maureen Jennings, the author of the books that form the basis of the internationally-acclaimed CBC TV series, has penned a new novel. It’s July 1936 and Toronto is under a record-breaking heat wave…hmm this could be July 2020 lol. T. Gilmore, owner of a private investigation firm, receives an anti-Semitic hate letter. Gilmore up to now has not acknowledged his religion. Meanwhile, Hilliard Taylor, a WWI veteran, requests the firm’s assistance in uncovering systematic embezzlement at his restaurant, Paradise Café. The two apparently unrelated events come together in this exciting novel.

If you enjoyed Catherine Hernandez’s recent book, Scarborough, you may enjoy her new dystopian novel. In a near-future, a queer Black performer and his allies join forces against an oppressive regime that is rounding up people deemed “Other” in concentration camps in Toronto.

In a small village in the Laurentians north of Montreal, a reclusive older woman is found strangled and frozen outside her home. Chief Inspector Roméo Leduc, about to go on vacation, reluctantly answers the call on the case. Roméo suspects a local biker gang is involved in what appears to be a robbery gone awry—or is it possible that the old woman is a victim of a violent hate crime?

Set in Montreal, the story begins when the body of a young woman is discovered after a crippling snowstorm. The only clue to her identity is the photograph in her pocket, listing the phone number of Detective Inspector Romeo Leduc. Meanwhile, Marie and Romeo are exploring their deepening relationship when a student at Marie’s college is assaulted. While Romeo considers that the dead woman may be linked to violence against several homeless people in the city, the search for justice in both cases is thwarted by societal apathy, even as the killer stalks the frigid streets of Montreal, preying on and terrorizing its most vulnerable citizens.

they said this would be fun: Race, Campus Life and Growing Up by Eternity Martis

In this memoir about what it’s like to be a student of colour in a predominantly white university, Martis describes her campus experiences at Western University. As one of the few Black students, she encountered white students in blackface, was the only person of colour in class and was tokenized by her romantic partners. She heard racial slurs in bars, on the street, and in class. Read about how she overcame these experiences and developed a deep sense of self-worth with the help of a network of women of colour.

Enter Our Giveaway To Win a Book Bundle of All of The Above-Mentioned Books. Open to Canada, 18+. Giveaway ends Sept. 17, 2020.

You may be interested in reading, “Bored? Read These Life Changing Nonfiction Books“.
This contest appears on Contest Canada